Trinity “The Tuck” Taylor to Emcee Missouri Entertainer of Year, May 17

An Amazing Night of Drag and Pageantry

"Having Trinity come in just lends to the caliber of entertainment and experience that our contestants and audience will enjoy," says Steven Delaney, owner of the MOEOY Pageant. "All of our guest entertainers are seasoned in entertaining and pageantry which will give our contestants a chance to get amazing feedback and exposure to those who can influence their drag careers." 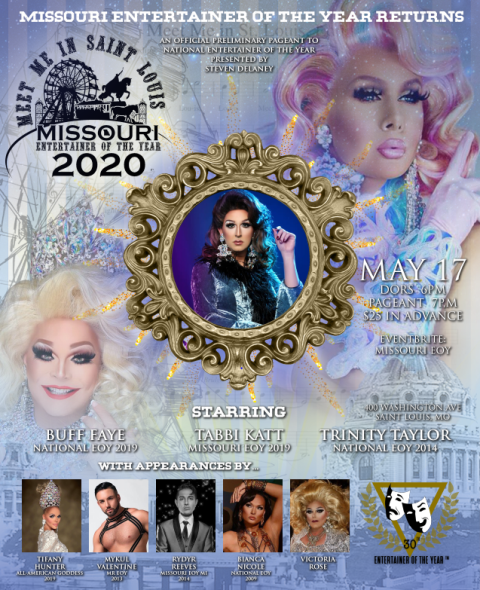 “After bringing Missouri EOY back after a nearly 5 year hiatus last year, I am extremely excited for the momentum that Tabbi Katt has brought with her top five finish at nationals and the exposure she has given EOY in Missouri and the region," Delaney explains. "We are quite excited by the buzz that has been going since announcing our special guests for this year."

Founded in 1990, MOEOY is a preliminary to National EOY held each summer in Louisville, Kentucky. The theme of this year's contest is "Meet Me In St. Louis" and promises an amazing night of drag and pageantry with contestants competing in presentation, talent, q&a and creative evening wear.

"It also provides one hell of a show for those that will be joining us that evening at Hamburger Mary’s," Delaney adds. "Five current or former national title holders and two local legends are confirmed.”