To say I fell in love with Oklahoma City would be an understatement. I thoroughly enjoy visiting lesser known cities around the country as you go in with little expectations or preconceived notions. I had visited OKC very briefly a few years ago, but never spent a substantial amount of time there. 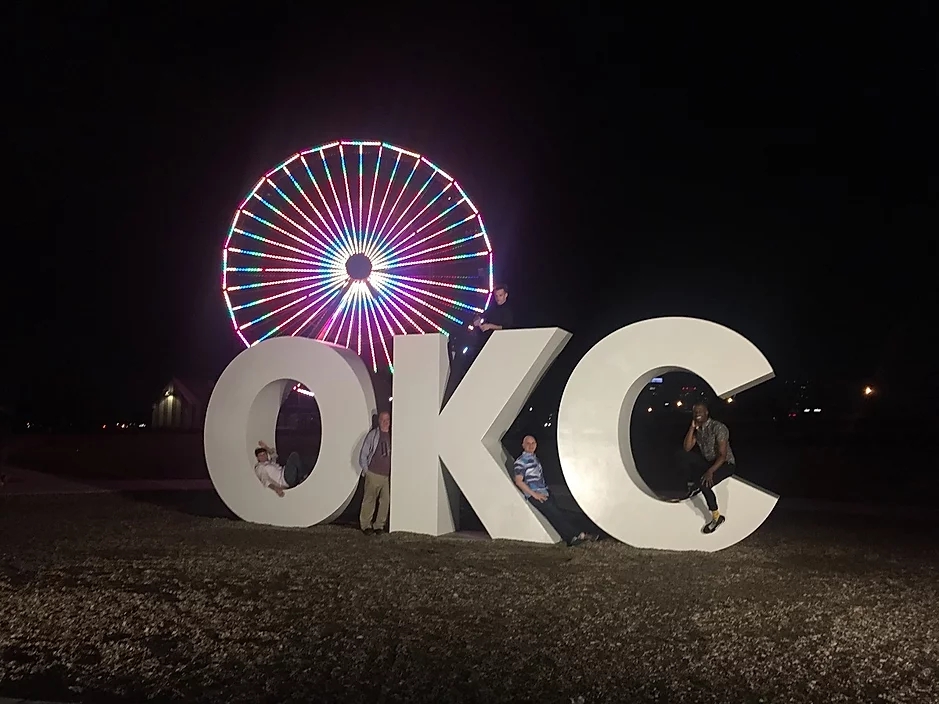 I quickly took note of the city’s evolution and progression over the past decade. Modern structures are popping up throughout the city, juxtaposed next to historic buildings that give a nod to the Oklahoma City’s past.

This trip was actually quite special as it was the first time the Oklahoma City Convention and Visitors bureau (Visit OKC) organized an LGBT specific media trip. The 21c Museum Hotel served as our host hotel for the stay and it couldn’t have been any more perfect. The rooms featured king-sized beds with two separate seating areas and a shower all 5 of us journalists could have fit in. No, that didn’t happen on this trip.

During our stay, the hotel was exhibiting an extraordinary pop culture series of artwork designed as if they knew the gays were coming to visit. I’m not sure how many Instagram photos we took throughout the hotel, but it’s safe to say, the number is in the dozens.

Even the hotel restaurant, Mary Eddy’s Kitchen x Lounge was incredible. Aside from breakfast, which was inexpensive and delicious, I ordered the Brussel Sprouts from the bar menu for a snack one afternoon and they were the best I’ve ever had. I’m not sure how they made them, but to quote Guy Fieri, they were out of bounds!

We began our Oklahoma City adventure in the Boathouse District at the U.S. Olympic and Paralympic Training Site for a once-in-a-lifetime experience training and rowing with Olympic hopefuls. Before we jumped into the river, we were given a crash course on rowing. I was so confident going in to this experience. I assumed I was an expert rower as I used the rowing machine at the gym many times. I was quickly proven otherwise. My form was completely off, and I rushed to correct it before heading out to the river. 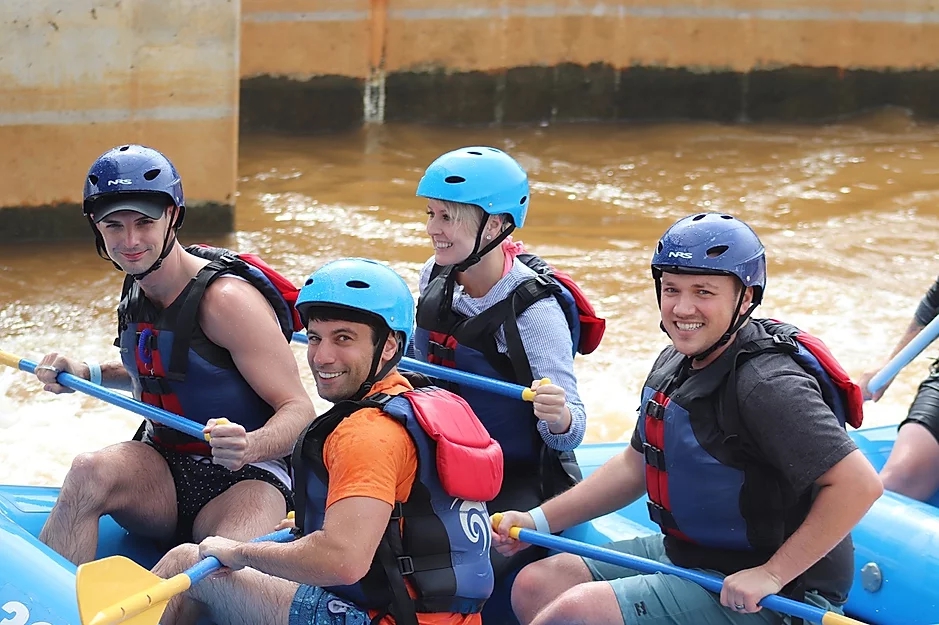 A team of extremely fit athletes met us at the pier and we jumped into the boat. Rowing is all about timing and it was integral that our strokes were timed perfectly to those of the athletes. Easier said than done. You can feel the sheer force as we propelled down the river at lightning speed. Once you get the hang of it, and everyone is in sync, the feeling is awesome. I should probably start training for Tokyo 2020.

Adjacent to the rowing center is the only urban whitewater rafting course of its kind in the world. Only two of us decided to face this challenge head on. How bad could it be? It wasn’t a real river or real rapids. After about a 20-minute information session on the basics of whitewater rafting, we were given our life preservers, helmets and oars. Our guide led us to our raft along with two other folks and we were off. A giant conveyer belt brings the raft to the top of the course and launches you into the roaring waters below.

With the Oklahoma City skyline in the background, our raft was tossed around in the water as we tried to maneuver through the rapids. The first lap around the course went off without a hitch, but I can’t say the same for the second lap. Let’s just say I ever so gracefully fell out of the raft, floundered around in the raging water like a salmon and prayed for someone to rescue me. Luckily, I am here to talk about it and would do it again in a heartbeat. 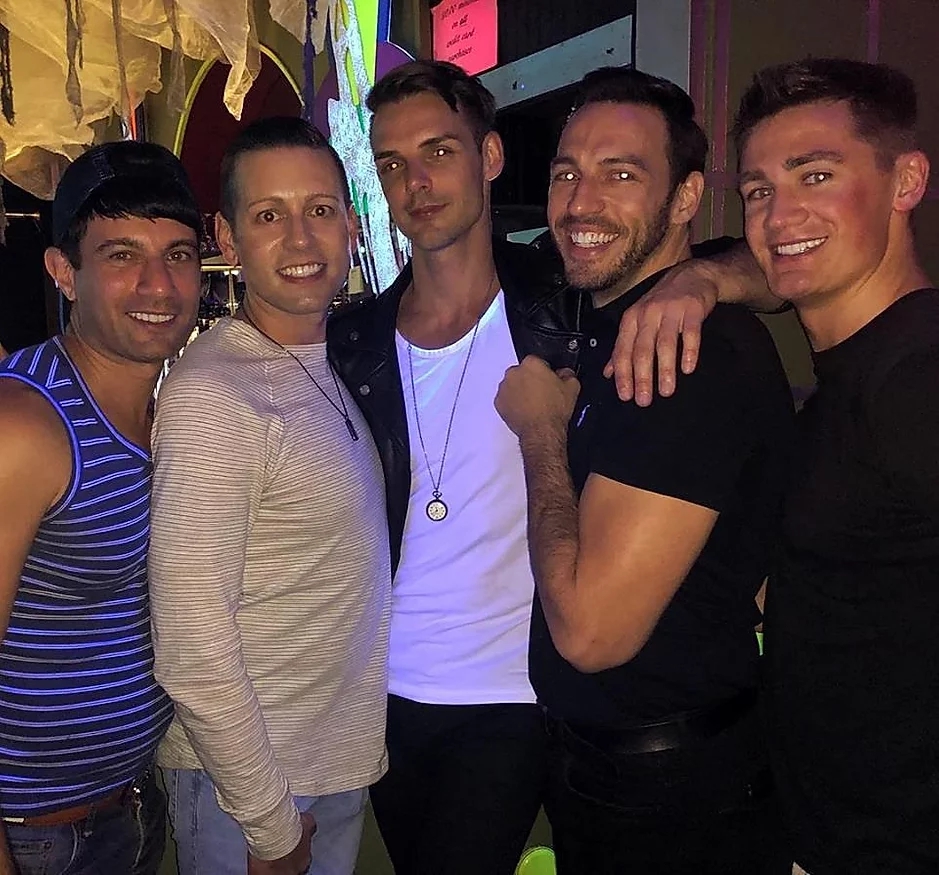 Another thing many people don’t know about until they visit is that OKC has a thriving gayborhood called 39th St. (The Strip). It is home to about 8 gay bars, a gay resort named the Habana Inn, a clothing store called Pulse and the LGBT community center. Our first stop was Apothecary 39, a wonderful neighborhood bar with inexpensive drinks and an incredibly friendly bartender named Phillip. Within minutes, we struck up a conversation with a group of very attractive local gays who took us under their wing and showed us the rest of the bars. Talk about hospitality.

Our next stop was The Boom, a drag bar that hosts a Sunday Brunch which unfortunately we weren’t able to experience on this trip but heard it’s fabulous. Once again, the drinks were cheap, the people were friendly, and the queens were feisty. Needless to say, we had an incredible time.

We started the next day with a hearty breakfast at Kitchen 324 and continued on to the Oklahoma City National Memorial & Museum, which stands as a symbol of strength in the wake of the unspeakable violent attack on April 19, 1995. The memorial is a beautiful tribute to the lives lost in the bombing and walks visitors through almost every moment of the horrific act. One of the most moving parts of the memorial is the circular room honoring each of the victims with photos and a personal memento donated by their family.

Our next stop was the National Cowboy & Western Heritage Museum, America’s premier institution of Western history, art, and culture. Founded in 1955, the Museum, collects, preserves, and exhibits an internationally renowned collection of Western art including works by Frederic Remington and Charles Russell, as well as sculptor James Earle Fraser’s magnificent work, The End of the Trail which greets you as you enter the museum to begin your journey back to the old West. 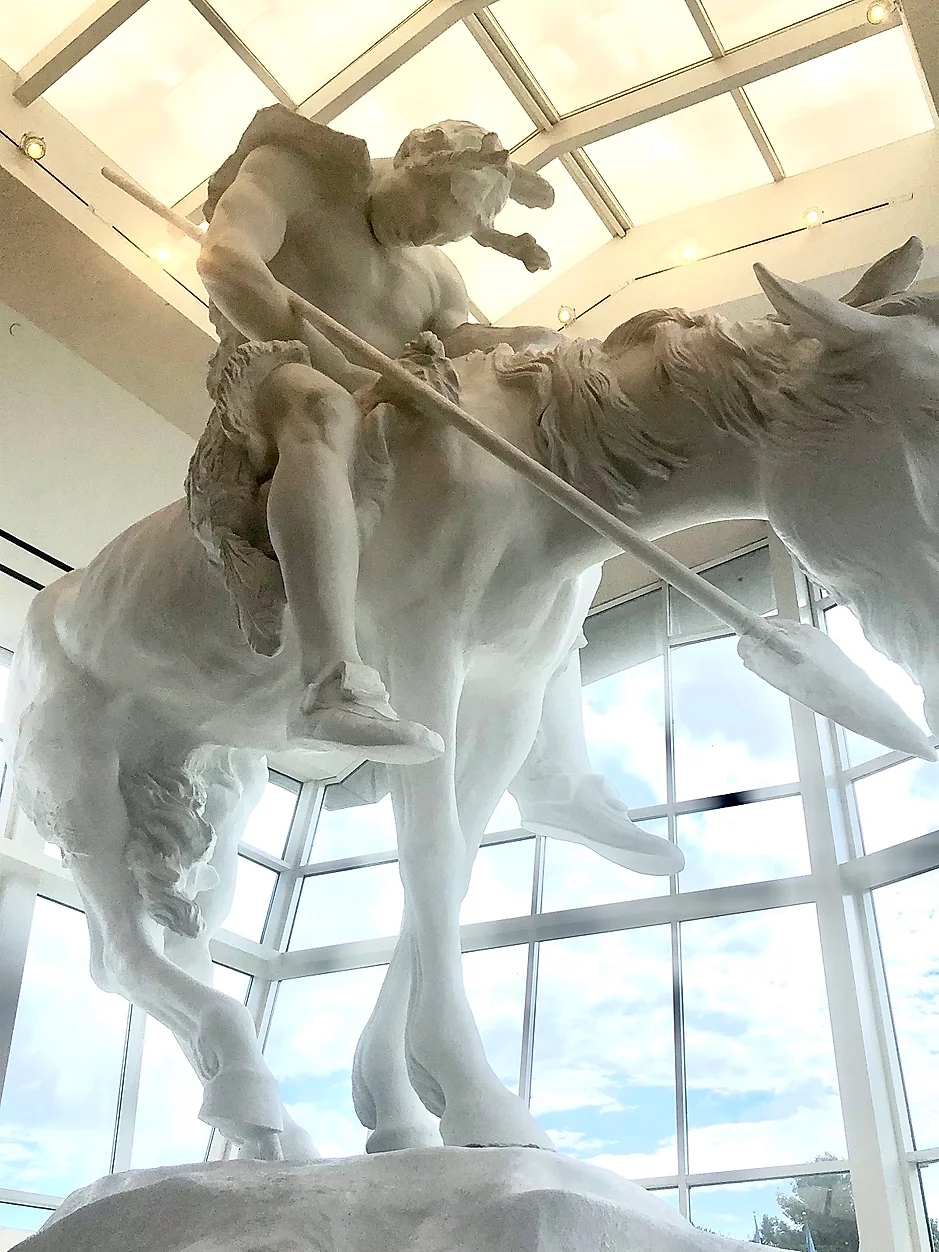 Continue the culture tour at the Oklahoma History Center. The enormous 215,000 square-foot building is a Smithsonian Affiliate and contains five galleries housing a variety of exhibitions. We had the opportunity to go into the archives and explore the hidden gems not on display to the general public including turn of the century gowns, an authentic Native American teepee and antique automobiles.

After a quick trip back to the hotel to freshen up, we began our progressive dinner at Vast, a restaurant and bar located atop OKC’s tallest building. I began to notice that Okie’s (Oklahoma locals), know how to make a good cocktail. Almost every specialty drink we ordered throughout the trip was not only unique, but delicious. We continued the meal at Barrio’s Mexican Kitchen in Midtown, then enjoyed some dessert at Roxy’s Ice Cream in the Plaza District, a cute neighborhood with dozens of murals. Yet another Instagram-friendly adventure.

As exhausted as we were, we found the energy to head back out to ‘The Strip’ but this time began the evening at Phoenix Rising with our new friends from the Oklahoma AIDS Care Fund before heading to The Finish Line and finally The Copa. I don’t remember the last time I shut down a club, but it happened in OKC.

The city is also home to quite a few lesbian bars and other neighborhood gay bars located off ‘The Strip’ including Hi-Lo Club, Frankie’s OKC, Partners and Alibis. For a city of its size, they sure do offer a nice selection of LGBT nightlife venues.

Waking up early the next morning was rough, but no pain, no gain. And today’s gain was extra special. We had the opportunity to feed Asian elephants and grizzly bears at the Oklahoma City Zoo. Getting that close to these majestic animals is always a treat. Even the grizzly bears seemed cute enough to cuddle with, although they are a lot larger up close than I originally thought. 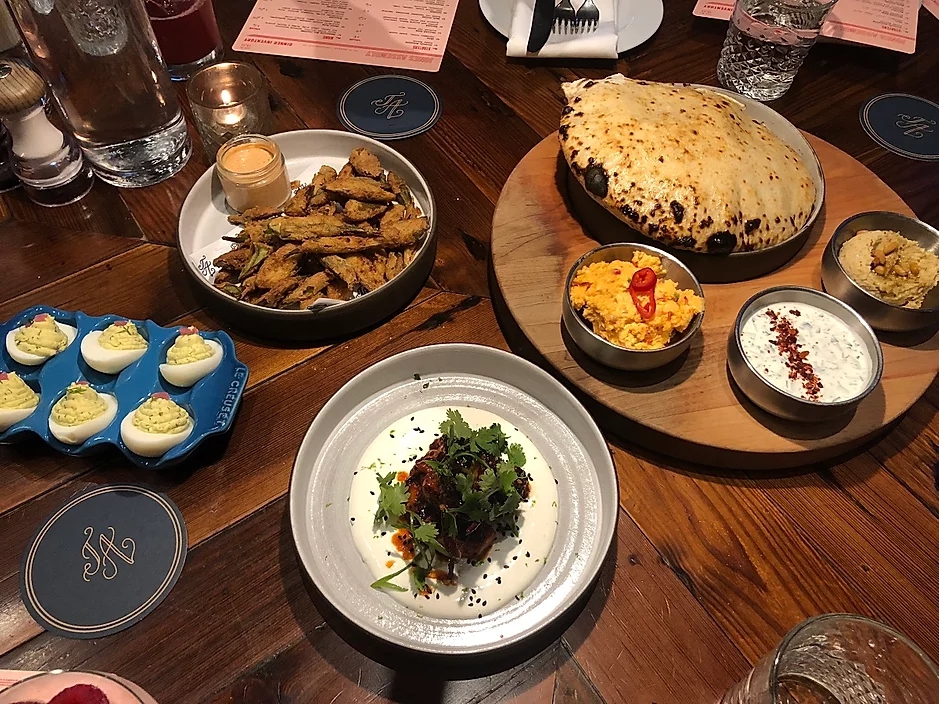 For our final meal as a group, we gathered at The Jones Assembly, an absolutely massive two-story restaurant and live music venue. Once again, the cocktails were off the charts. I ordered the Dagwell Dixie, made with roasted pecan infused George Dickel rye, laird’s applejack, and Hella orange bitters. It was similar to an Old Fashioned, but the flavored rye gave it a welcomed twist.

We shared a few appetizers including a selection called Dips + Spreads, a trio of garbanzo hummus, tzatziki, pimento cheese, coupled with wood-fired dough. I had no idea that wood-fired dough tasted so good. The restaurant offers a nice selection of pizzas, salads and main entrees including Steak Frites, Short Ribs and their take on Nashville Hot Chicken. It was a memorable way to end such a memorable trip.

What was most surprising about Oklahoma City was its culture and diversity. The city is welcoming, affordable and offers something for everyone. I feel like Oklahoma City is on the verge of something big; maybe they will become the next “It City”.

Joey Amato is the publisher of Pride Journeys, a website dedicated to LGBT travel. Joey has spent over a decade in LGBT media and public relations and currently resides in Nashville, Tennessee. He can be reached at joey "at" pridejourneys.com