Philadelphia, the United States’ birthplace, is proud of the roles it has played—and plays still—in the founding, furtherance and celebration of the LGBTQ civil rights movement. The City of Brotherly Love and Sisterly Affection has an easy to explore trail of LGBTQ historic sites and markers among vibrant neighborhoods where queer life thrives.

To see and do it all, visitors need to spend at least a couple of nights, and that’s made easy with the Visit Philly Overnight Hotel Package®, offering free parking and more perks.

Here’s an essential itinerary for visitors interested in Philadelphia’s LGBTQ history and present:

Perhaps not surprisingly, Philadelphia’s Historic District, the original city, played a pioneering role in the birth of the United States’ LGBTQ rights movement. Between the Delaware River and 7th Street and Vine and Lombard Streets are the colonial yet contemporary neighborhoods of Old City and Society Hill—and Independence National Historical Park, home of the Liberty Bell, symbol of the abolitionist movement and freedom in general. 6th & Chestnut Streets 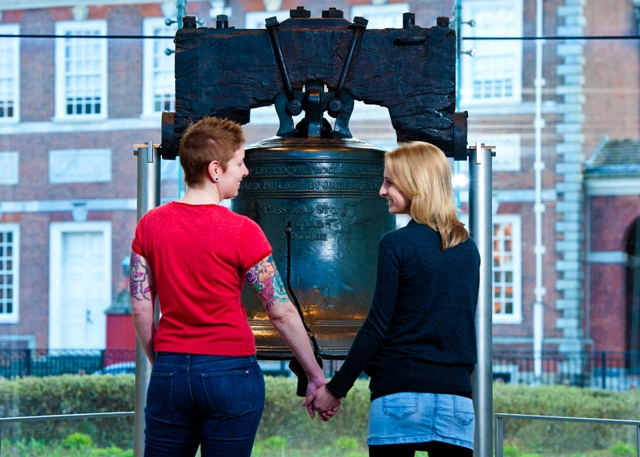 • Arch Street Meeting House – The historic home of a more than 200-year-old Quaker “Friends” congregation hosted 300 LGBTQ activists in February 1979 for the Philadelphia Conference, to plan the first National March on Washington for Lesbian and Gay Rights. That October, that march would attract 100,000 demonstrators and would define a national civil rights movement. Visitors can view the historic marker outside the meetinghouse and are welcome inside. Hours vary seasonally. 320 Arch Street, (215) 627-2667, archstreetmeetinghouse.org

The center of Philadelphia’s gay residential life and culture since World War II, the blocks between 11th Street and Broad Street, Pine Street and Chestnut Street earned their nickname—the “Gayborhood”—during an October Outfest event in 1995. In 2007, Mayor John Street dedicated 36 rainbow street signs around the neighborhood. Since then, the rainbows have multiplied, adorning more street signs (72 in all), homes, businesses and crosswalks at 13th and Locust Streets. 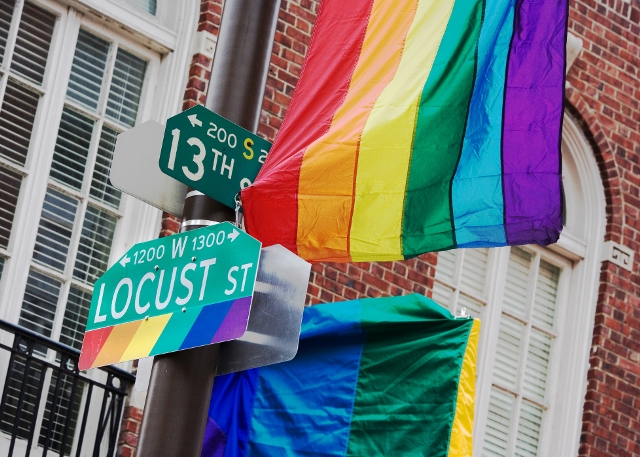 • Shopping – Independent shops have set up their own stakes in the neighborhood too. Don’t miss the clever handmade soaps and products at Duross & Langel (which doubles as a men’s grooming lounge and salon), hip and Philly-centric finds at gift shops at Turney and Safran’s Open House and Verde, thoughtfully curated Japanese housewares and beauty products from Rikumo, global jewelry at Bella Turka, original and vintage jewelry at Halloween and throwback Philly (and some other) sports team and fan gear at Mitchell & Ness and Shibe Vintage. Between 11th & Broad Streets and Pine & Chestnut Streets

• Nightlife – The name of the after-dark game is: Don’t stay in one place too long. Bar hopping rules the night in these parts. Energetic partiers can be found partaking in singalongs at piano bar Tavern on Camac, casually knocking a few back at Writer’s Block Rehab, Toasted Walnut or Knock, flirting at dance club Voyeur, catching a cleverly queer show or two at Tabu, hanging with friends and maybe having a nosh at Franky Bradley’s, imbibing at beer spots (Boxers, Ubar) or socializing at mega club, bar and lounge Woody’s, a Gayborhood staple since 1980. Between 11th & 13th Streets and Pine & Chestnut Streets

• AIDS Library Historical Marker – Founded in 1987, this community library was the nation’s first to dedicate itself to the delivery of information on HIV treatments, services and resources. Today, the safe center continues to offer referrals for nearby and national resources and provides the public with free internet access. Today, it’s part of the Philadelphia FIGHT network of community health centers. 1233 Locust Street, 2nd floor (wheelchair accessible), (215) 985-4851, aidslibrary.org 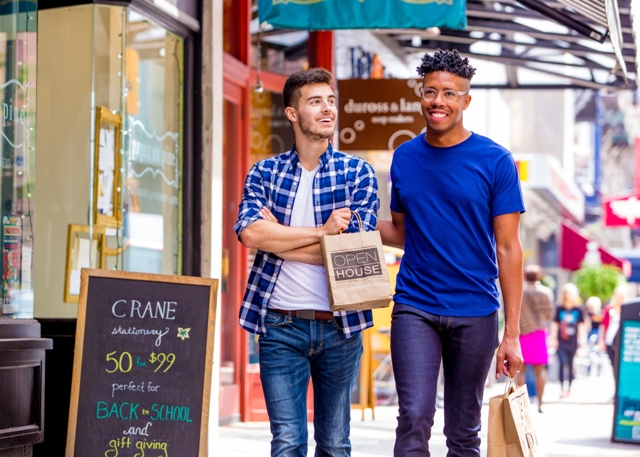 • John Fryer Historical Marker – This new Pennsylvania Historical Society marker honors the late activist John Fryer, M.D. In 1965, the University of Pennsylvania expelled Fryer from his psychiatric residency program on the basis of his homosexuality, then deemed a mental illness by the American Psychological Association (APA) in 1952. In 1972, Fryer, a faculty member at the Temple University School of Medicine, offered an electrifying anonymous testimony that resulted in the APA’s 1973 declassification of homosexuality as a mental illness.13th & Locust Streets, phmc.pa.gov

• Tavern on Camac – From around 1920 to 1960, wood block-paved Camac Street between Walnut and Spruce Streets was known as “Philadelphia’s Greenwich Village.” Maxine’s, a speakeasy and musical bar, was at the heart of LGBTQ life along Camac. Today (and for the past 20 years), Maxine’s is known as Tavern on Camac, the city’s longest continuously running LGBTQ bar, still with the piano bar (sing-alongs are popular), weekend dancing and a dinner-only restaurant. 243 S. Camac Street, (215) 545-0900, tavernoncamac.com

Philadelphians refer to their city’s downtown, the area bound by the Delaware and Schuylkill Rivers and Vine and South Streets, as “Center City.” The Gayborhood and the Historic District are east of Broad Street. LGBTQ history and life thrives west of Broad too. (Broad Street runs north and south between 13th and 15th streets.) 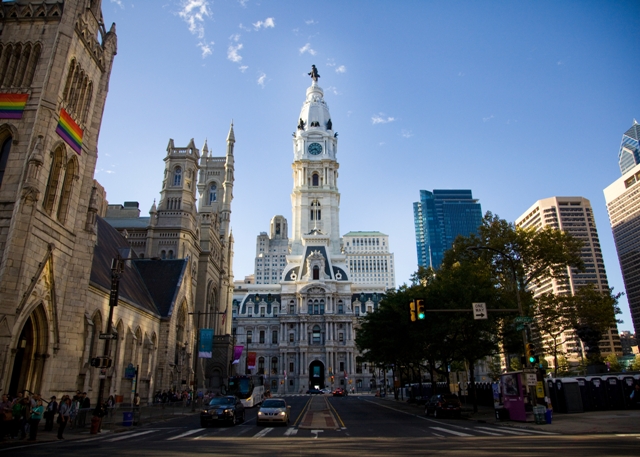 • Philadelphia City Hall – More than an architectural marvel and the seat of city government, City Hall is where, in 1982, Philadelphia became one of the first U.S. cities to pass an ordinance prohibiting discrimination based on sexual orientation. It’s also where countless gay couples have come to marry and get their marriage licenses since 2014, when Pennsylvania enacted marriage equality. Broad & Market Streets, Room 121, (267) 514-4757, phlvisitorcenter.com/CityHall

• Rittenhouse Square – The most elegant of the five public squares laid out in city planner William Penn’s original plan, tree-lined Rittenhouse Square has been an alfresco sanctuary for LGBTQ Philadelphians dating back to the 1930s and was the starting point of the city’s first Pride parade in 1972. One block from the square, the nation’s first LGBTQ sit-in took place in 1965 at a 24/7 diner (now demolished). Three blocks east on Spruce Street, the first meeting of the early East Coast Homophile Organization (ECHO) took place in 1963 at The Drake, then a hotel. Today, Rittenhouse Square’s benches and lawns are filled with all manner of Philadelphians, and the neighborhood around the park has grown into the city’s busiest center of business, shopping, dining and nightlife. 18th & Walnut Streets

• The Barbara Gittings Home – A pioneer in the LGBTQ rights movement, Gittings, a Philadelphia resident from age 18 and lifetime activist, edited The Ladder, the nation’s first lesbian magazine, co-organized the Annual Reminders at Independence Hall (see above) and led charges both to promote positive LGBTQ literature in public libraries and to change the APA’s classification of homosexuality as a mental illness. A Pennsylvania Historical and Museum Commission marker at 21st and Locust Streets honors the home she shared with photojournalist partner Kay Lahusen. A sign at 13th and Locust Streets in the Gayborhood declares the thoroughfare Barbara Gittings Way.


From deep in South Philly, home of the cheesesteak and Philly’s sports pro arenas, to the Philadelphia region’s most iconic Revolutionary War-era site, all the way to a bucolic Bucks County village, the region offers LGBTQ attractions to appreciate. 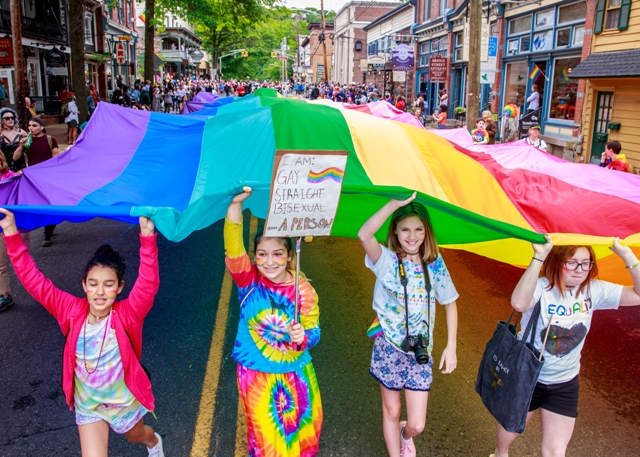 • Keith Haring Mural – South of Center City, circa 1987 We the Youth is an original work by out Pennsylvania native and artist Keith Haring. It’s one of the many Mural Arts Philadelphia program’s murals created by LGBTQ artists or about the LGBTQ movement. 22nd & Ellsworth Streets, muralarts.org

• New Hope – In the 1940s, the Bucks County riverside hamlet of New Hope became a popular destination for Broadway-bound performers and musicians. Since then, the artsy village—just a 45-minute drive from Center City—has developed into a beloved destination for the LGBTQ visitors (and residents), offering both a respite from city life and more than a dash of stellar restaurants, bars and shops, the Bucks County Playhouse and antique and vintage stores. Each May, New Hope Pride Week & Parade starts with “Rainbow Flagdrop”—a mile-long banner on loan from Key West—along with a parade and fireworks over the Delaware River. The pool at The Raven is a popular summer destination for those seeking refuge from surrounding metropolitan areas. visitnewhope.com, visitbuckscounty.com