When you think of Greece, your mind immediately takes a story-book detour. Images of famous philosophers wandering along sandy beaches, making worldly observations, isn’t far from the truth – in some places.

We visited three locations in Greece: Athens, Mykonos and Santorini. The experience of each was remarkably different and, taken as a whole, incredibly memorable. 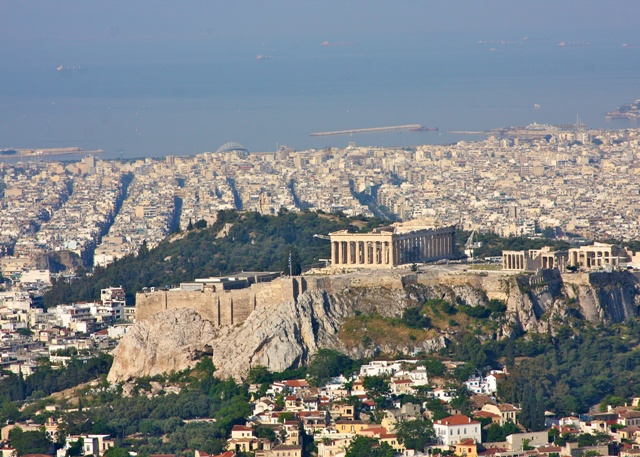 Athens is a bit city of great traditions and pieces of history everywhere. It is also a city in a modern transition of economic disaster to regaining it’s once-held place as a teeming metropolis. As we came into Athens, it was loud, hot and difficult to get around. Our cab driver had to stop and ask directions on how to find our hotel. Along the way, we would count the number of boarded-up or closed storefronts, with an occasional business still open. It was, at first sight, depressing. The sight of vast Olympic venues sitting un-used (the city hosted in 2004) was depressing, but there was a certain spirit about the people we met and spoke with that was refreshing.


But coincidental to that, is a thriving tourist area where monuments, parks and museums offer a rarified glimpse into the ancient and recent past of the city. When we are in a foreign city, we are strong advocates of using one of the “Hop-On/Hop-Off” tourist bus services, especially if it is our first time visiting. These buses provide an opportunity to get to all of the “must see” places, usually with recorded history about the various areas you are driving through, for much less cost than cabs to each of these places would be individually. They also offer you an opportunity to get off, explore, and get back on whenever you feel like you want to move forward. In Athens, it was an excellent method of getting to and from many tourist attractions. You also get a bit of history of the different neighborhoods.

Of course, the big attraction here is the Acropolis, and well worth the climb up to visit the grounds. The sense of history is nearly overwhelming, and the hands-on approach to visiting most of the grounds gives you a tactile perspective. The Parthenon, part of the Acropolis, is an amazing structure and gives you the sense of grandeur of the past. In the same area, you can find a multitude of shops and restaurants, and the foodie side of me was in heaven: baked feta cheese wrapped in phyllo dough and drizzled with honey and black sesame for an appetizer. Or, experience a true Greek salad consisting of only bell pepper, red onion, olives, feta cheese and house-made dressing. One night, my group discovered a wonderful family-owned restaurant that offered sixteen different small plates for our group of six, and each one was more delicious than the last. 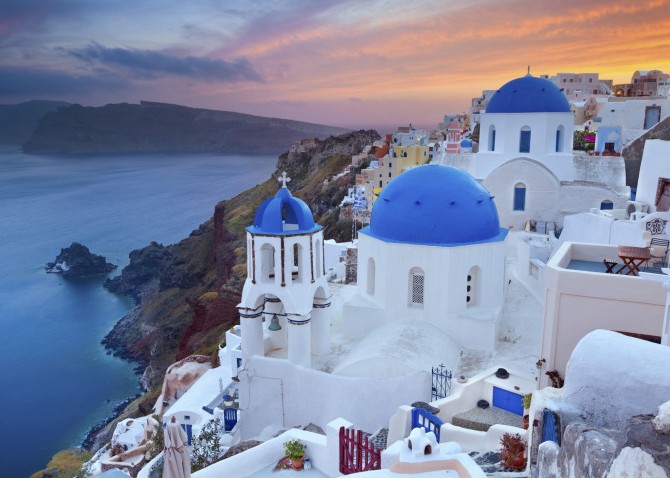 After Athens, it was onto Mykonos, and since we were visiting just off-season (when rates can be significantly lower), we didn’t experience the high level of gay culture or activity. But, we did find a quaint, hopelessly romantic city of small, white, winding streets; vistas overlooking the sea, warm and friendly people and charming shops. It’s a small island, and we arrived via ferry from Athens, and found our way around with very minimal trouble. Of the many highlights here, I would recommend getting lost in the old part of Mykonos and just wander.

Then, it was onto Santorini, also by ferry. Santorini is a bit larger, and if you’ve ever seen a photo of the place, it’s hard to imagine that it did it justice. Built into the remnants of an island left over after a volcano, Santorini has attached itself to the rugged side of cliffs – building hotels, businesses and homes almost vertically into the landscape. Our hotel, although it had only 28 rooms, had several levels, all looking out to sea, and all connected by winding outdoor staircases. It was incredibly spectacular, and far exceeded any expectation I had of the place.

We took a few excursions – a boat-ride to the barren remains of the volcanic island in the harbor, which deposited us back on the main shore where we were faced with a decision to ride donkeys back to the top or walk up the narrow pathways from the shore to the top of the cliff. We opted to walk – but it was a true exercise, and would probably go for the donkey next time. There is terrific shopping and around every corner is another breathtaking view. Don’t be afraid to haggle over prices (slightly, though – remember this is a country full of recession and people need to make a living), as it is expected and fun. Ask about things on the menu. One evening, something that we thought was lamb was actually goat, which turned off one of our diners on that selection.

My only word of caution about Santorini – it is hilly and you will be walking, a lot. Everywhere. There are no cars in it’s most commercial tourist areas – it is all sun-dappled winding white-washed streets. And once there, you wouldn’t have it any other way.

We took the ferry back to Athens (about four hours), and the ferry services are clean and efficient and safe. Greece was one of those destinations that was not high on my list, but after visiting, is wholly recommended.