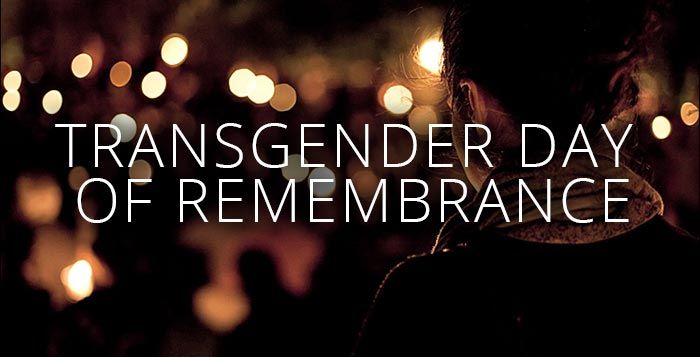 So the history is this: the Transgender Day of Remembrance (TDOR) was started by transgender advocate Gwendolyn Ann Smith as a vigil to honor the memory of Rita Hester, a transgender woman who was killed in 1998. The vigil commemorated all the transgender people lost to violence that year and began an important memorial that has become the annual Transgender Day of Remembrance. From 1999 forward, the service has continued, spreading across the world. A hallmark of the service is the reading of the names, where known, of all of those who have been murdered since the previous year.

According to the founder: "The Transgender Day of Remembrance seeks to highlight the losses we face due to anti-transgender bigotry and violence. I am no stranger to the need to fight for our rights, and the right to simply exist is first and foremost. With so many seeking to erase transgender people — sometimes in the most brutal ways possible — it is vitally important that those we lose are remembered, and that we continue to fight for justice." - Gwendolyn Ann Smith

Why do we continue to commemorate this event? The reason is simple. The underlying ignorance about the trans community, the unintentional and intentional othering, all lead to an atmosphere in which violence is more likely, and justice less likely. The perpetrator of assault, rape, or murder against a trans person is less likely to be arrested, arraigned, tried, convicted, sentenced, and serve time than the perpetrator of the exact same crime against a non-trans person.

So we still have dead sisters, brothers and siblings to remember. And it is important to remember them. As one of the most marginalized groups in our society, with the least access to employment, the least access to opportunity, the least access to health care, the lowest ability to exercise the right to vote, the highest rate of assault and murder, Trans people collectively have little voice. On the Transgender Day of Remembrance, often called “TDOR” by the community (pronounced “TEE-DOOR”), we say the names of those who had little voice, and now have none. We do so to ensure that at least at this time, at this place, they are not forgotten; that they are remembered, and that someday, their collective human sacrifices will have meant something. That someday there will be employment equality. That there will be access to health care. That someday law enforcement will be fully engaged in seeing Trans folk as people. That Trans lives matter. Someday.

For those wishing to attend an event marking the Day of Remembrance, here are some of the events (apologies if not complete) in the area:

St. Louis has one of the oldest traditions commemorating this day, beginning with the ceremony at:

This memorial; has been held by the Gateway Sisters of Perpetual Indulgence since 2001 and is a community tradition, with the roots of its founding including collaboration with LGBT and Trans rights pioneer Sylvia Rivera. The service begins at 7:00 p.m., no photos please, and is followed by a community potluck (all are welcome; bring a side dish or dessert if so moved).

On Nov. 20, 2014, 6 p.m., Transgender Day of Remembrance, there will be an intersectional gathering of members of the trans community coming together with members of the community of Ferguson to protest against violence. Paper lanterns will be provided, or participants may bring their own.

On Wednesday November 26, a march, beginning with a guest speaker at 9:30 p.m., and then marching together around 10:15 p.m. Meet in the parking lot of Commerce Bank, on the corner of Sarah St. and Chouteau Ave. Dress for winter, bring a sign or flag to carry. The goal is to be visible on behalf of the Trans community and speak through action for those who we lost in this last year. We remember.

According to the TVT Project (TransRespect Vs. Transphobia), in 2013, 238 Trans people were murdered. 237 were trans women. As of 10/29/14, 226 trans people had been killed, all women. Hopefully next year, the number will be smaller, and the next year, and the next.

Maybe some year, we will gather only to remember how it used to be, and will have no new names to commemorate.