2015 marks a celebration five decades in the making as Philadelphia observes the 50th Anniversary of the Lesbian, Gay, Bisexual and Transgender Rights Movement. Commemorative exhibitions at major institutions and a moving re-enactment of the original Fourth of July demonstration honor the milestone year.

Earning a perfect score on the Human Rights Campaign's Municipal Equality Index for three years running, The City of Brotherly Love is among the nation's leading gay-friendly destinations and played a pivotal role in the earliest days of the American LGBT-rights movement.

The first major U.S. protest for queer equality took place in the shadow of Independence Hall on July 4, 1965 as the site of the signing of the Declaration of Independence played host to LGBT demonstrators marching in the footprints of founding fathers like Adams, Jefferson and Franklin.

Coordinated by Philadelphia resident Barbara Gittings and Washingtonian Frank Kameny, oft referred to as the mother and father of gay rights, the protest marked the first time activists from multiple cities openly identified themselves as LGBT and called for equality. The “Annual Reminder” protest took place every Independence Day for four years.

On June 28, 1969—days before the last Annual Reminder—the Stonewall riots in New York City shook the LGBT community. Leaders who were influential in the Philadelphia protests focused their efforts on the Christopher Street Liberation Day, which marked the first anniversary of the Stonewall riots and included the country’s first Gay Pride parade.

This week, anniversary organizers announced that they will present Edie Windsor, plaintiff in the historic 2013 Supreme Court marriage equality decision, and Judy Shepard, mother of Matthew Shepard and international activist for LGBT and human rights, with the International Role Model Awards at the Independence Visitor Center. Both will be participating in events through the celebration, including the 50th anniversary ceremony at Independence Hall on July 4, 2015.

Here’s a look at Philadelphia’s yearlong 50th Anniversary of the LGBT Rights Movement:

• The Rosenbach of the Free Library of Philadelphia puts unpublished works and handwritten notes by Oscar Wilde on public display for the first time in Everything is Going on Brilliantly: Oscar Wilde and Philadelphia. The exhibition focuses on Wilde’s life and work and highlights his connections and inﬂuence in Philadelphia. Believed to be either homosexual or bisexual, Wilde gave a series of lectures throughout the area in 1882, and in many ways, he never left. Through April 26, 2015. 2008-2010 Delancey Place, (215) 732-1600, rosenbach.org

• The National Museum of American Jewish History will uncover Jewish stories in the movement for LGBT rights through a special installation. Public programs will focus on the Jewish LGBT experience in America. The museum also invites people to share their own Jewish LGBT stories through a Tumblr project (nmajh-lgbt.tumblr.com). April-August 2015, exact dates TBD. 101 S. Independence Mall East, (215) 923-3811, nmajh.org

• At the National Constitution Center, Speaking Out for Equality: The Supreme Court, Gay Rights, and the Constitution explores the gay-rights movement through the constitutional “conversations” that have framed the struggle for equality. Supreme Court cases and public discourse reflect the national mood at various points along the journey. June 5-September 7, 2015. 525 Arch Street, (215) 409-6700, constitutioncenter.org

• The paintings and drawings of Philadelphia-born José Luis Cortes, one of the earliest out Puerto Rican artists, depict New York City’s gay scene. Taller Puertorriqueño mounts an exhibition of his works in En Blanco y Negro (In Black and White): A Gay-Latino Perspective. In conjunction, the Puerto Rican cultural center will host an artist residency program and workshops for Taller’s students working with youth from GALAEI, a local
LGBTQ youth center. The accompanying panel discussion, entitled A Gay-Latino Perspective (June 20), features the voices of LGBT Latinos in

• Through the photographs of Gerard H. Gaskin, The African American Museum in Philadelphia’sLegendary captures the culture of “house balls.” These parties, popular in the African-American and Latino gay and transgender communities, allowed marginalized groups to embrace and showcase their most vibrant selves in a safe space. Evidenced by the photos, the “house balls” were full of artistry and self-fashioning. June 12-August 16, 2015. 701 Arch Street, (215) 574-0380, aampmuseum.org 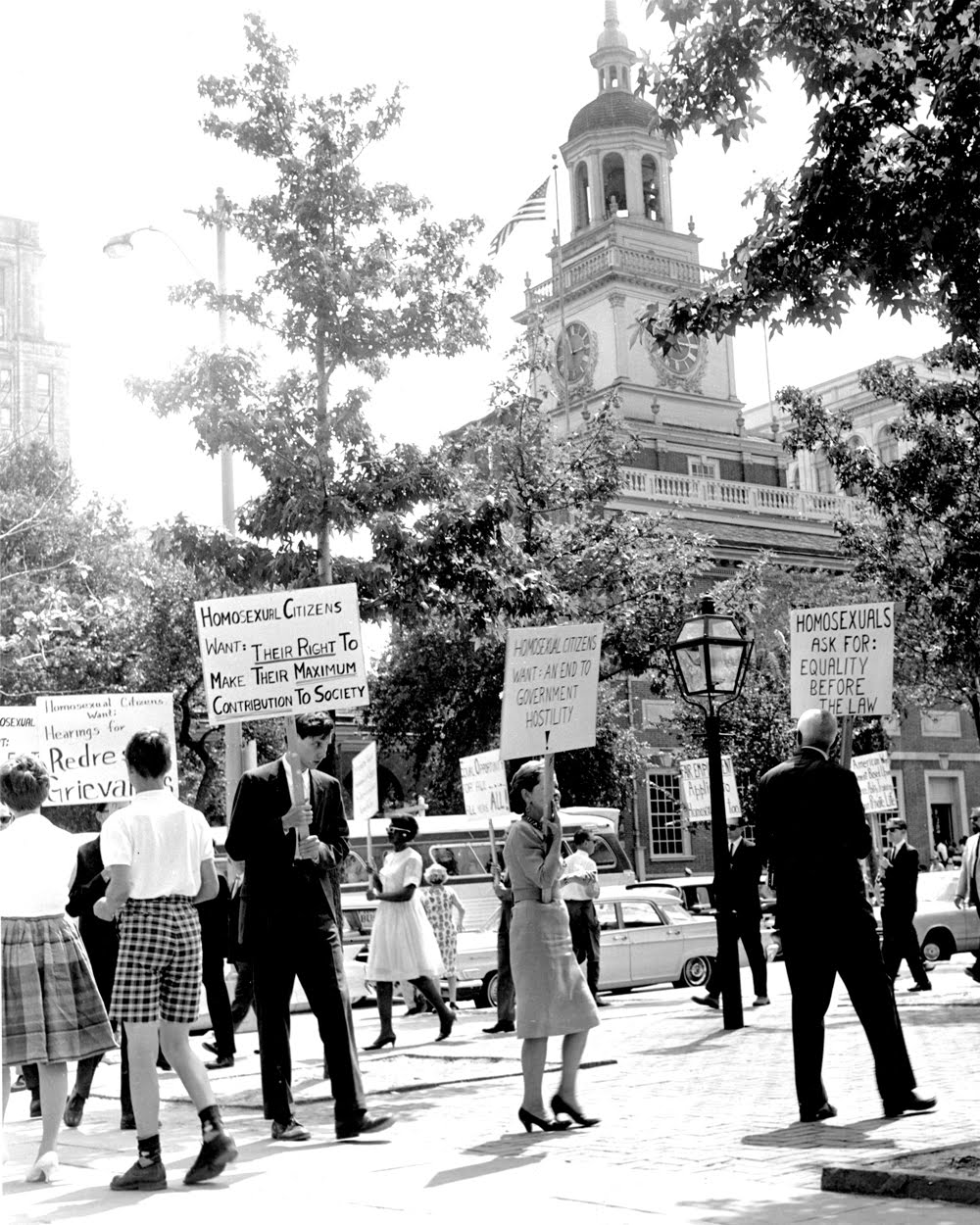 • The Free Library of Philadelphia’s LGBTQ Library Activism exhibition emanates from the 1960s protests led by Barbara Gittings, founding coordinator of the American Library Association’s Gay Task Force. It will feature moments from her life including her first protest march at Independence Hall 50 years ago. Also on display: books and materials important in the life of the LGBTQ community from the pre-Stonewall era to today. The exhibit will be displayed in the Parkway Central Library’s West Corridor.June 22-August 14, 2015. 1901 Vine Street, (215) 686-5322, freelibrary.org

• Independence National Historical Park Rangers and LGBT volunteers present an annual program that explores the role of Independence Hall in historical movements for social change, including the Reminder Day demonstrations. Taking place at the Independence Visitor Center, this year’sIndependence Hall and the History of Gay Rights in Philadelphia will highlight the significance of 1960s Reminder Day demonstrations in LGBT history—both for Philadelphia and the country. June 2015, exact date TBD. 6th & Market Streets, (215) 965-2305, nps.gov/inde

• This year’s annual symposium on LGBT regional history, Fighting Back: Defending the LGBT Mind and Body in Pennsylvania focuses on health activism and the LGBT community. At the Historical Society of Pennsylvania, speakers will examine the 1970s struggle to remove the mental illness stigma imposed by the American Psychiatric Association, as well as the contributions to the field made by Temple University psychiatrist John Fryer. They’ll also cover early AIDS history in Philadelphia and Pittsburgh. In conjunction, the William Way LGBT Community Center will host an exhibit examining the work of AIDS activist Kiyoshi Kuromiya. October 18-19, 2015. Historical Society, 1300 Locust Street, (215) 732-6200, hsp.org; William Way, 1315 Spruce Street, (215) 732-2220, waygay.org

• Nationally renowned legal experts will discuss the state of gay rights across the country as part of aNational Legal Panel at the National Museum of American Jewish History. 6:30-7:45 p.m. Later that night, the museum moves from serious to seriously fun for its LGBT Party. 10:00-11:30 p.m. 101 S. Independence Mall East, (215) 923-3811, nmajh.org

• The local NPR and PBS affiliate, WHYY will screen Gay Pioneers. The documentary about the Annual Reminders explains how the Philadelphia protests laid the groundwork for Stonewall in 1969. A sure-to-be-insightful discussion will follow. 7:00-8:30 p.m. 150 N. 6th Street, (215) 351-1200, whyy.org

• The annual Celebration of Freedom Ceremony at Independence Hall, part of the city’s Wawa Welcome America! Fourth of July bash, marks the nation’s birthday with music, speeches and readings from the Declaration of Independence. This year’s event will pay homage to the Reminder Day demonstrations. 10:00 a.m. Later in the day, Equality Forum will host the official 50th Anniversary Ceremony, complete with a stirring re-enactment. 3:00-4:00 p.m. Chestnut Street between 5th & 6thStreets, welcomeamerica.com

• A wreath-laying ceremony will commemorate the protests at the Gay Rights Demonstrations Historical Marker, which was erected 10 years ago for the 40th anniversary of the first Reminder Day. 2:00-2:30 p.m. 6th & Chestnut Streets

VISIT PHILADELPHIA® makes Philadelphia and The Countryside® a premier destination through marketing and image building that increases the number of visitors, the number of nights they stay and the number of things they do in the five-county area.

Press release contributed to this article.