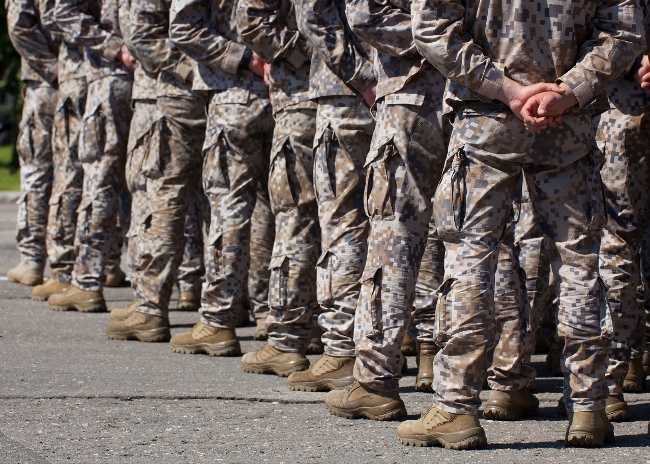 WAYNESVILLE, MO – Janell Jackson just wanted some information on an upcoming Pride Luncheon at Ft. Leonard Wood, a U.S. Army base in southern Missouri. What she received was the anti-gay opinions of a local publisher.

The event in question will be held on June 30th – a luncheon where Command Sgt. Major. Teresa Duncan will speak about coming out after the repeal of “Don’t Ask, Don’t Tell.”

Jackson, 24, had posted a query regarding the date of the event on the personal Facebook page of Darrell Maurina – journalist and owner of Pulaski County Daily News, which focuses heavily on base activities. She was no stranger to Maurina – having shadowed him as an 18-year-old student when he worked for the Daily Guide.

"This is an event I do **NOT** want to promote or encourage, and one which I do not plan to attend unless some other media organizations also attend,” replied Maurina. “I've already asked U.S. Army Fort Leonard Wood public affairs personnel to alert me if any other media plan to attend the event; I'll cover it if I have to do so, but it's not something to which I want to give attention if nobody else is doing so." 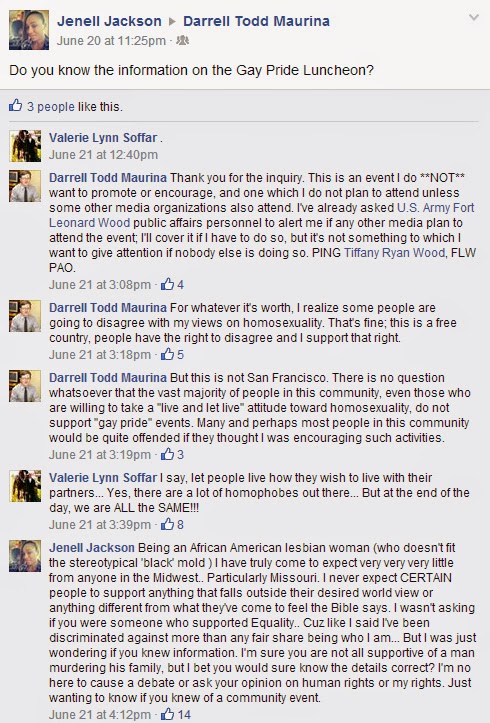 The out lesbian and dependant of her retired U.S. Army father was taken aback.

“His reaction seemed very emotionally charged,” Jackson said. “It didn’t’ seem like him at all because he always came from a more fact-based reaction. He didn’t even address what I asked. I was kind of a shock that he made something big out of something that wasn’t even brought up.”

Jackson defended her community in the thread, which was followed by Maurina proclaiming in a new Facebook post: "Promoting 'Gay Pride' in Pulaski County: This isn't San Francisco #PulaskiCountyMo #FortLeonardWood.”

“I don’t think the San Francisco comment was even appropriate,” said Jackson. “We’re everywhere. We’re not limited to any city where we’re out and proud. It wasn’t a fair comment. People are out everywhere and it was a very closed-minded response.”

Maurina’s Facebook page, which is public, has since erupted in a few viral threads where he colorfully denfended his position. Still, the newspaperman maintains he meant no harm.

“I have no problem whatsoever with Janell; she is not the issue and is a fine young woman,” he explained, offering that he was a supporter of “Don’t Ask, Don’t Tell” and disagrees with homosexuality.

“I am convinced that if I had gone out next Monday and covered Sgt. Major. Duncan’s speech a lot of people who don’t know my views would be intensely angry,” said Maurina. “I cover a lot of things I disagree with. I find it very interesting that many people who read me don’t know what my views are. On this issue, however, it is extremely controversial and hot button – this is not San Francisco where it is settled that this is a perfectly fine thing.”

But LGBT rights advocates view Maurina’s statements as a reminder of the work that remains in Missouri.

“This is another example highlighting our struggle for equal and fair treatment is far from over,” said A.J. Bockelman, Executive Director of PROMO, Missouri’s statewide LGBT advocacy organization. “We have seen historic movement in the last year since Windsor and yet a simple inquiry about a Pride Luncheon on Ft. Leonard Wood can evoke such a strong rebuke from a journalist. Paranoia, stigma and blatant discrimination are still present in rural Missouri.” 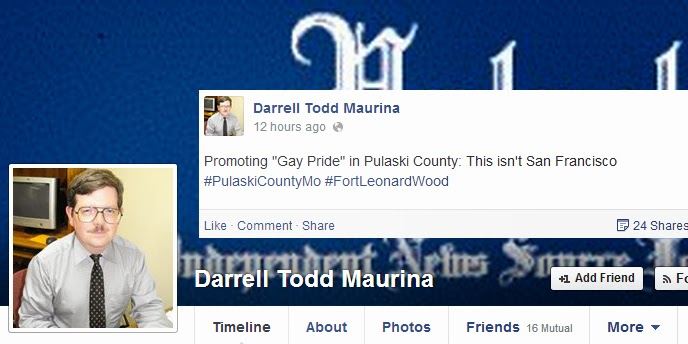 Pressed why it isn’t his job to cover events or topics that he doesn’t agree with, and Maurina counters, it’s the new reality.

“The modern view of media objectivity is a relatively new development,” Maurina explained. “I do not have a problem with Fox news approach to news. We have about 50-thousand people in last census [in Pulaski County, Mo.] and there’s going to be wide variety of opinions. But it’s an overwhelmingly conservative community.”

For Jackson, who had a difficult time coming out to her parents, this has been a surprisingly positive experience.

“When I posted his response it really blew up,” said Jackson, who plans to wed her fiancée Pamela Hall in Eureka Springs, Ark. next year. “It went way further than I expected; it’s amazing to see all of the support from people [in my area].”