Castor, a former Tampa police chief, is the third out lesbian to win a big city mayoral race in 2019 – more than doubling the total number of lesbians who have ever served as big city mayors. Both Lori Lightfoot of Chicago and Satya Rhodes-Conway of Madison, Wisconsin won their mayoral elections earlier this month. 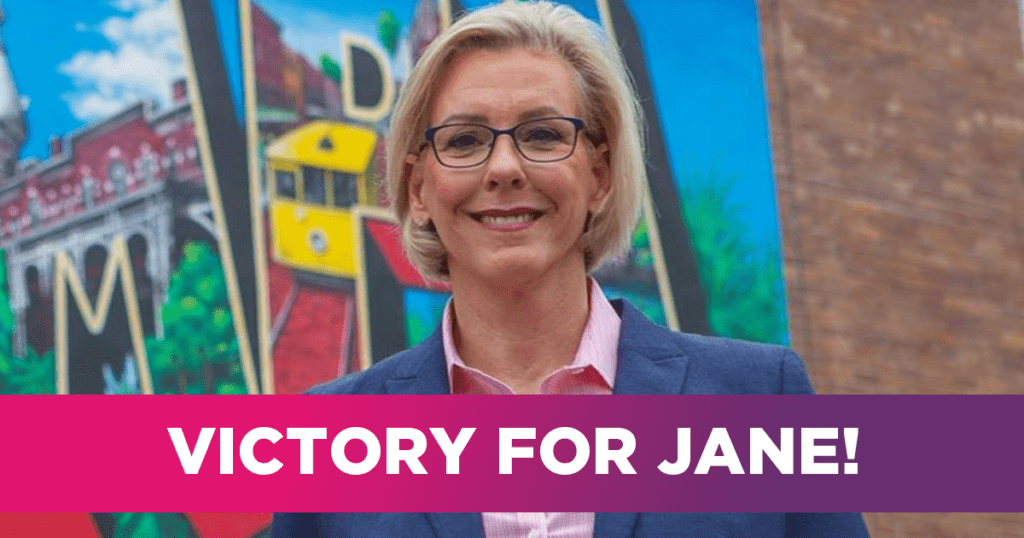 “A lavender ceiling was shattered in Florida Tuesday night – with voters overwhelmingly electing Jane Castor the first openly lesbian big city mayor in the Southeastern United States. Both LGBTQ people and women face tremendous obstacles in running for public office, but Jane’s victory shows lesbian candidates can win citywide office with a strong record of public service and policy priorities that align with their constituents. While voters chose Jane because of her vision for Tampa, her willingness to be open and honest about her life lent her an authenticity that voters are drawn to not just in Tampa, but across the nation. That is why an unprecedented number of lesbian candidates are plowing through crowded primaries and winning big city mayoral races this cycle – putting us on-track to make 2019 the Year of the Lesbian Mayor.”

Only five out lesbians have ever been elected mayor of top 100 cities – three of them elected just this year. If Jolie Justus wins her race for Kansas City mayor this June, that number will rise to six, tripling the number of lesbian mayors elected to top 100 cities. Before this cycle, only two out lesbians were elected big city mayors: Mayor Annise Parker and Mayor Jenny Durkan. The complete list includes:

“Congratulations to Tampa Mayor-elect Jane Castor on her historic victory last night, said DNC Chair, Tom Perez. "Castor inspired voters by showing her dedication to Democratic values and the issues that matter most to working families. In addition to becoming the first LGBTQ mayor of Tampa, she’s set to become the first openly LGBTQ person elected mayor of a major city in the Southeastern United States.

“Our diversity is our greatest strength, and our elected leaders should reflect the communities they represent," Perez continued. "This year alone, Democrats have elected three new lesbian mayors in major cities, mobilizing a new generation of leaders. I look forward to working with Mayor-elect Castor to make Tampa a more inclusive, equitable, and welcoming place for all.”