SPRINGFIELD, Mo. - The Springfield News Leader Editorial Board, today, published a scolding rebuke of the voters who opted to repeal the city's LGBT-inclusive nondiscrimination ordinance this week.

On Tuesday, Question 1 passed by a slim margin, thus scrapping City Ordinance 6141 which added sexual orientation and gender identity to the list of protected categories in employment, housing and public accommodation. The ordinance passed last October. 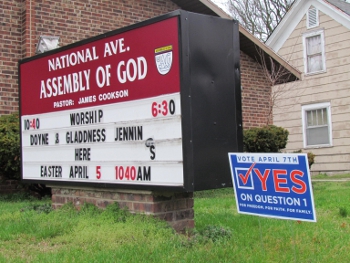 The election is over and we congratulate the candidates who won school board and city positions. To those who did not, we commend you for your effort and your willingness to serve our community.

We can not, however, congratulate those who voted to repeal a nondiscrimination ordinance our city needs and our community deserves.

While the vote to repeal the nondiscrimination ordinance, expanded last October to include sexual orientation and gender identity, is a win for some, it's a loss not only for our friends and neighbors, but for our city as a whole.Tuesday's election result sullies our city's reputation and is attracting negative attention regionally and nationally, from Los Angeles to Detroit, Washington, D.C. and beyond. We hope the vote doesn't have unintended economic repercussions.

In spite of the repeal, we believe this polarizing issue accomplished something important for our community: An increased awareness that the discrimination exists, and a realization that individual community members can no longer sit the fence.

You are either OK with discrimination, or you are not.