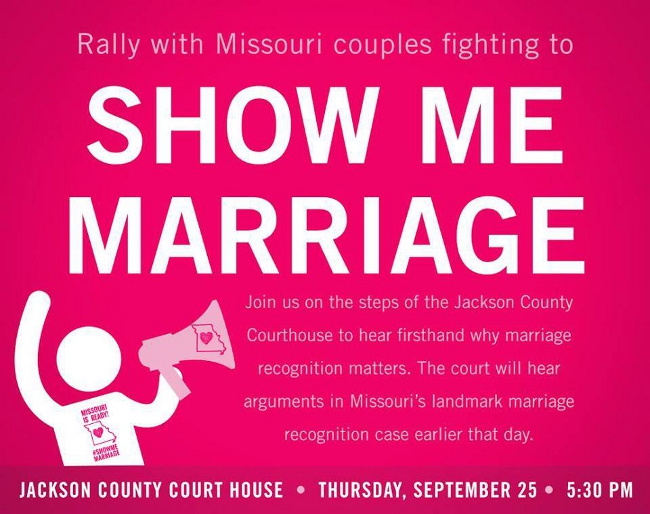 KANSAS CITY, Mo. - On September 25 at 9:30am, Jackson County courthouse in Kansas City will hear oral arguments on a landmark marriage case of ten plaintiff couples. Filed in February 2014 by the ACLU of Missouri, Barrier v. Vasterling, includes ten Missouri couples seeking recognition of their out of state marriages in Missouri. This case, if won, could lead to legally married Missouri couples that have been married out of state having their marriage recognized in Missouri.

Due to the oral arguments happening this week, coalition partners that started the public awareness campaign Show Me Marriage (www.ShowMeMarriage.com), ACLU of Missouri, PROMO, Progress Missouri, and Freedom to Marry, will gather at the courthouse the same evening on September 25 for a rally on the courthouse stairs. The speakers at the rally will include National Campaign Director for Freedom to Marry Marc Solomon, ACLU of Missouri, Kansas City Mayor Sly James, PROMO, Human Rights Campaign - Kansas City, and plaintiff couples from the case. Details for the event are below.


For more information on the Show Me Marriage coalition please visit www.ShowMeMarriage.com or https://www.facebook.com/ShowMeMarriage.