SPRINGFIELD, Ill. – A significant legislative measure to ensure students in Illinois public schools would learn about the contributions of lesbian, gay, bisexual, and transgender people in state and national history was approved by the Illinois Senate, according to Equality Illinois. The bill’s next step is consideration and action by Illinois Gov. JB Pritzker.

The Inclusive Curriculum Bill – House Bill 246 – would ensure the inclusion of the contributions of LGBTQ people in the history curriculum taught in Illinois public schools. The bill passed the Senate with a bipartisan vote of 37-17. The measure passed the Illinois House 60-42 in March. Illinois is the fourth state to pass such legislation, after California in 2011 and New Jersey and Colorado in 2019.

Sponsored by State Rep. Anna Moeller (D-Elgin) and State Sen. Heather Steans (D-Chicago), the Inclusive Curriculum Bill is an initiative of Equality Illinois, the Illinois Safe Schools Alliance, and the Legacy Project and is supported by more than forty education, health care, and civil rights organizations across Illinois. 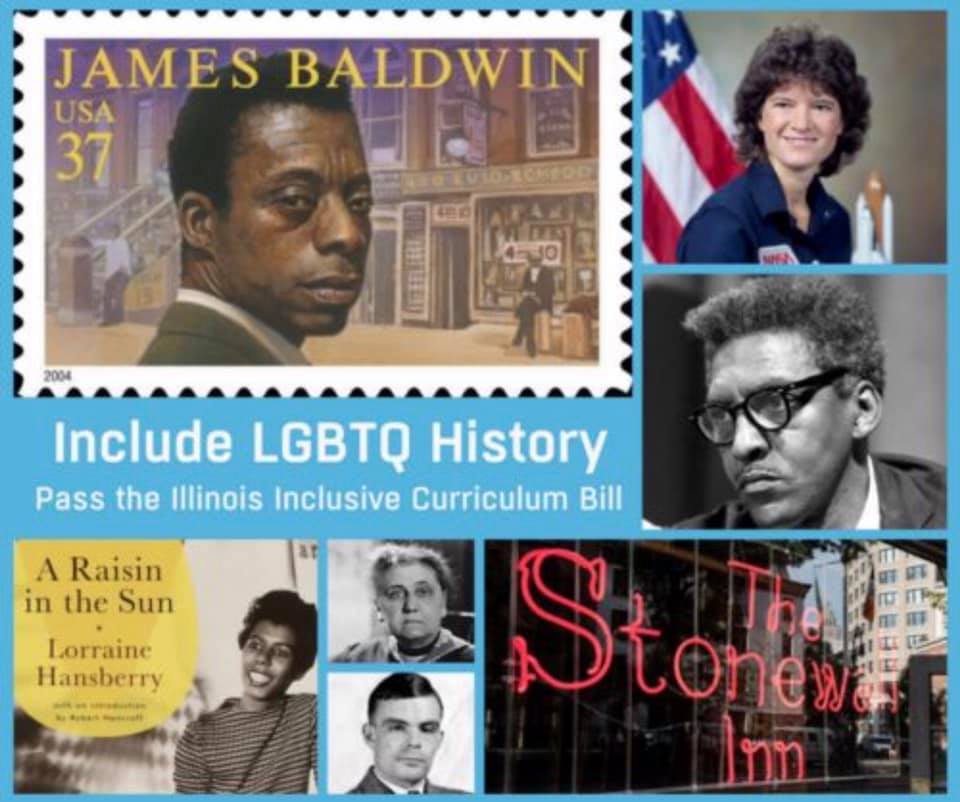 “We are excited the Illinois General Assembly passed the Inclusive Curriculum Bill in 2019 - the 50th anniversary year of the Stonewall Riots and the birth of the modern LGBTQ equality movement,” said Brian C. Johnson, CEO of Equality Illinois. “As a former first grade teacher, I know how an inclusive education system can create change within a community. By including information in public school curriculum about the contributions of LGBTQ people and the historical events they were involved in, we will get closer as a state to telling the whole story of our shared history.

“We thank Rep. Moeller and Sen. Steans for their bold leadership,” Johnson said. “We appreciate the support of the Illinois General Assembly. Now, we urge Gov. Pritzker to approve the legislation.”

“This legislation exemplifies a demonstrated commitment to build and nurture an inclusive and supportive environment in the educational system in Illinois," said Mary F. Morten, Board Chair of the Illinois Safe Schools Alliance. "Gaining a greater knowledge and understanding of the contributions of various underrepresented communities benefits all of us. As we move toward what true diversity, equity and inclusion means in our school communities, this is a critical and vital step in the right direction."

"I was proud to work with Equality Illinois to pass this bill in the House,” said State Rep. Anna Moeller, Chief House Sponsor of the Inclusive Curriculum Bill. “This legislation will ensure that our schools are providing a more comprehensive and accurate teaching of history and creates a more welcoming, tolerant and safe environment for all of our students in Illinois. It also affirms the dignity and contributions of LGBTQ individuals and the movements that have shaped the world we live in today."

“We applaud the sensitivity and the political courage the Illinois General Assembly has shown in passing this pivotal legislation. Illinois is on the right side of history with this important, life-saving bill," said Victor Salvo, Executive Director of the Legacy Project. “In our work, we know how difficult it can be to break through the redaction of LGBTQ people from humanity's story and the consequences of that redaction on our kids. To deny a child information that could give them hope, that could help them feel less alone, help them feel like they mattered–while at the same time condemning them to hearing bigoted slurs in the hallways of their schools–is a cruelty that every feeling adult has a responsibility to stop."

The Illinois School Code presently ensures inclusion in history curriculum of the contributions and experiences of other historically marginalized communities, including of people of color, women, immigrant communities, and people with disabilities.

An inclusive curriculum can have positive, affirming benefits and help counteract some disturbing trends. Sadly, in schools across Illinois and the United States, LGBTQ students are told, through bullying, harassment, and exclusion, that they do not belong. These conditions have created a school environment where LGBTQ students are forced to hide their identity simply to protect themselves.

If approved by Gov. Pritzker, the Inclusive Curriculum Bill would go into effect on July 1, 2020.