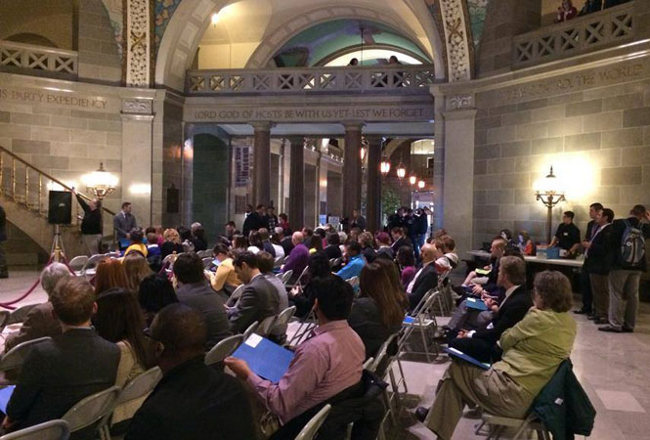 JEFFERSON CITY, Mo. – The Show Me State’s annual Equality Day was held at the state capitol in Jefferson City on Feb. 19, where dozens of LGBT and allied Missourians lobbied state lawmakers to support the Missouri Nondiscrimination (MONA) and Safe Schools Acts, which were recently introduced in both chambers.

“This is a year of change,” said A.J. Bockelman, Executive Director of PROMO, Missouri’s statewide LGBT advocacy organization. “We are seeing bipartisan appeal around our issues in Missouri.”

MONA, PROMO’s perennial landmark legislation has a long history in Jefferson City, and proponents say this could be its year to pass.

The bill would add sexual orientation and gender identity to Missouri’s Human Rights Statute, which already protects other categories, including race, biological sex and familial status. Last year, the legislation passed through the Senate but failed to reach the House floor.

“I support it because it’s the right thing to do, without a doubt,” offered Mo. Rep. Noel Torpey (R-Kansas City). “In my eyes this is an issue as clear-cut as possible. It’s simply a choice between right and wrong and we need to pass it.”

Sen. Scott Sifton (D-Affton) agreed. Sifton recently acknowledged that his father was a member of the LGBT community last week while calling for the passage of MONA.

“I thought it was important for people to understand that I’m not just some progressive politician up here posturing,” Sifton explained. “It’s important to me and my family, including my father and my father’s brother [who is also gay]. I’m passionate about it because it impacts people I’ve known my entire life.”

The day started off with a rally in the rotunda featuring a host of speakers, including out Missouri legislators Sen. Jolie Justus (D-Kansas City) and Mike Colona (D-St. Louis). Attendees were then broken down by district and lobbied representatives from both chambers.

To date, 14 cities and counties in Missouri have nondiscrimination ordinances that include both sexual orientation and gender identity.

The proposed Safe Schools legislation would add enumerated categories to the existing anti-bullying statute. These include protection from bullying for Missouri students on actual or perceived characteristics, such as race, color, religion, ancestry, national origin, gender, gender identity or expression, sexual orientation, or mental, physical or sensory disability, or the basis of association with others identified by these categories.

“It’s important to include enumerated categories so school administrators and school boards know how to train and educate their staff,” said Tracy McCreery, former Mo. State Rep. from Olivette and Manager of Public Policy for PROMO.