The evening will constitute the largest-ever audience for a Democratic presidential town hall devoted to lesbian, gay, bisexual, transgender and queer (LGBTQ) issues and will mark the first time in history that a major cable news network will air a presidential event devoted to issues of importance to the LGBTQ community. The Human Rights Campaign and the Human Rights Campaign Foundation comprise the world’s largest LGBTQ civil rights organization, representing more than 3 million members and supporters. 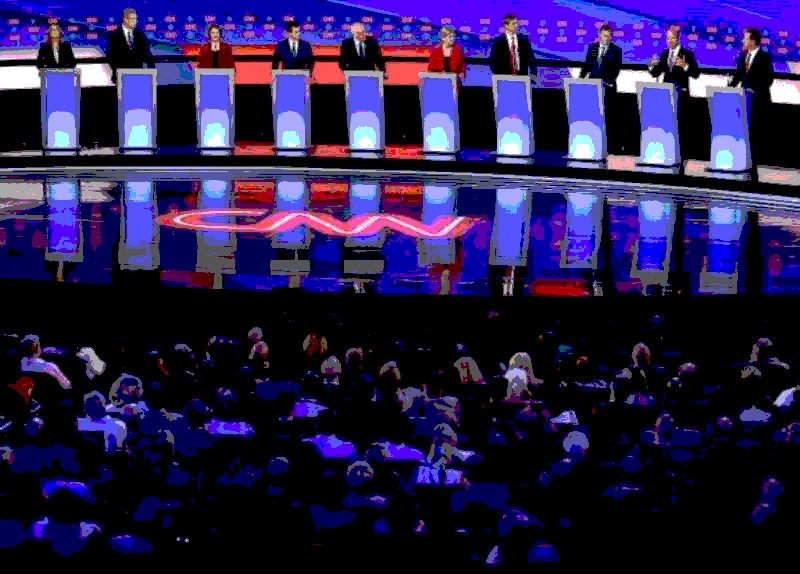 CNN’s Anderson Cooper, Don Lemon, Dana Bash and Chris Cuomo will moderate HRC and CNN’s historic presidential town hall on LGBTQ issues. Similar to previous town halls, two candidates will appear back-to-back each hour throughout the evening and take questions from the audience and a CNN moderator. The current line up is as follows:

“We’re pleased to see such strong interest among the candidates to participate in the historic Power of our Pride town hall and articulate their visions for LGBTQ people,” said HRC President Alphonso David. “For many of the 57 million Equality Voters across the country, the event will mark the first time they will hear from this Democratic presidential field about how they plan to achieve full federal equality for LGBTQ people, among other issues vital to the community. Our community is at a crossroads and we must identify a leader who can defeat the anti-LGBTQ Trump-Pence ticket and reverse their many attacks on LGBTQ people. Given the high number of candidates participating, this event is poised to help us do just that.”

“This town hall comes at a critical time in our fight to achieve equality for lesbian, gay, bisexual, transgender and queer people (LGBTQ) in this nation," added HRC President Alphonso David. "Today, in 30 states, LGBTQ people remain at risk of being fired, evicted or denied services because of who we are. Thirty-five states have yet to ban the dangerous and debunked practice of 'conversion therapy,' which is harming our young people. Hate crimes are rising, and more than 100 transgender people — most of whom are transgender women of color — have been killed in the United States in the last five years. Although the federal government should be protecting all residents, the Trump-Pence Administration is directly attacking our community by banning transgender troops from serving our country openly, undermining health care services for people living with HIV, and seeking to erase LGBTQ people from protections under law.”

Power of Our Pride will take place on Thursday, October 10 at The Novo theater in Los Angeles, California. The event is set to take place on the eve of the 31st annual National Coming Out Day, a celebration of individuals publicly coming out as lesbian, gay, bisexual, transgender, queer (LGBTQ) or as allies. The first National Coming Out Day was held on October 11, 1988 on the first anniversary of the National March on Washington for Lesbian and Gay Rights as a way of celebrating the power of coming out and advocating for a safe world in which LGBTQ individuals can live truthfully and openly.

The live audience will be comprised of HRC members, supporters and community leaders. Tickets will be invitation-only.

Over the last two years, the Trump-Pence Administration has rescinded key protections for transgender students, appointed two new anti-LGBTQ justices to the Supreme Court, banned transgender troops from serving openly in the military, and has repeatedly sought to allow discrimination against LGBTQ people in healthcare, housing, public accommodations and other aspects of life under the guise of “religious freedom.” Despite campaigning on a promise to be a “friend” to the LGBTQ community, President Trump designated Mike Pence as his vice president, and has refused to advance bipartisan federal civil rights legislation -- the Equality Act -- which overwhelmingly passed through the U.S. House of Representatives this spring.

These issues are of crucial importance to LGBTQ voters and allies. Today, there are an estimated minimum of 10 million LGBTQ voters nationwide -- along with millions of parents, siblings, friends, colleagues, and allies -- who will play a decisive role in the 2020 elections. Since 2016, HRC has identified more than 57 million “Equality Voters” nationwide who prioritize LGBTQ-inclusive policies, including marriage equality, equitable family law, and laws that would prohibit discrimination on the basis of sexual orientation and gender identity.

In order to participate in the town hall, candidates must meet the fall DNC debate eligibility criteria: two percent or more support in four separate national or state polls and 130,000 unique donors with a minimum of 400 individual donors across 20 states. The last day for qualifying polls to be released or for qualifying donors to be counted will be September 25th. Candidates must submit their qualification criteria by 11am on September 26th.