SPRINGFIELD, Ill. – Equality Illinois is at the Illinois State Fair, which opened Thursday, seeking support from fairgoers against President Trump’s proposed ban on transgender people serving in the military.

Fairgoers who stop by the Equality Illinois booth during the State Fair, which runs now through Aug. 20 in Springfield, will be able to sign a message to their U.S. representative that Equality Illinois will forward to Washington. 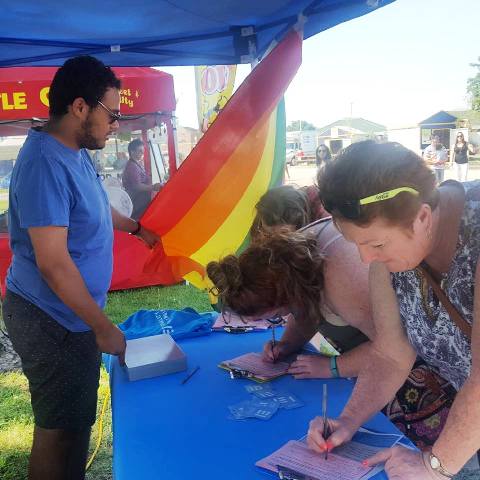 “Illinoisans believe in inclusion and fairness. Over the years at the Illinois State Fair, we have engaged with thousands of Illinoisans from every corner of the state who support LGBTQ civil rights,” said Brian C. Johnson, chief executive officer of Equality Illinois, the statewide civil rights organization for lesbian, gay, bisexual, transgender, and queer Illinoisan.

“This year, we are asking fairgoers to send messages to Congress to stand with all of our brave and patriotic service members, including transgender people who are serving or wish to serve,” Johnson said.

The messages to Congress continue a tradition at the Illinois State Fair going back to 2012, when Equality Illinois first opened a booth there and collected signatures on postcards in support of marriage equality that were sent to state legislators.

“Every year, more and more fairgoers tell us how important it is for ALL Illinoisans to be visible, affirmed, and represented at our Illinois State Fair,” Johnson said.

Additionally, Illinoisans unable to be at the fair can take action online and send a message to their U.S. representative at tinyurl.com/NoTransBan.

“Fairgoers can get their corn dogs and lemon shake-ups, visit the famous butter cow, and take action with our volunteers to support ALL of our troops,” Johnson said.

Working with Equality Illinois at the fair this year are Peoria Proud, the Coalition of Rainbow Alliances (CORAL), and the Abraham Lincoln Unitarian Universalist Congregation of Springfield. The Equality Illinois booth is located in the southeastern corner of the fairgrounds, by the Skyglider and close to Gate 2 at the corner of Sangamon Avenue and Peoria Road.