Congresswoman Tulsi Gabbard, a Democrat from Hawaii, announced over the weekend that she's running for president in 2020.

Rep. Gabbard, who was first elected to Congress in 2012, was a major in the Army National Guard, Iraq veteran, and served as vice chair of the Democratic National Committee in 2016. She is also the first Hindu and Samoan American member of the U.S. Congress. If elected in 2020, she would take office before turning 40, making her the youngest person ever to hold the nation's top job. 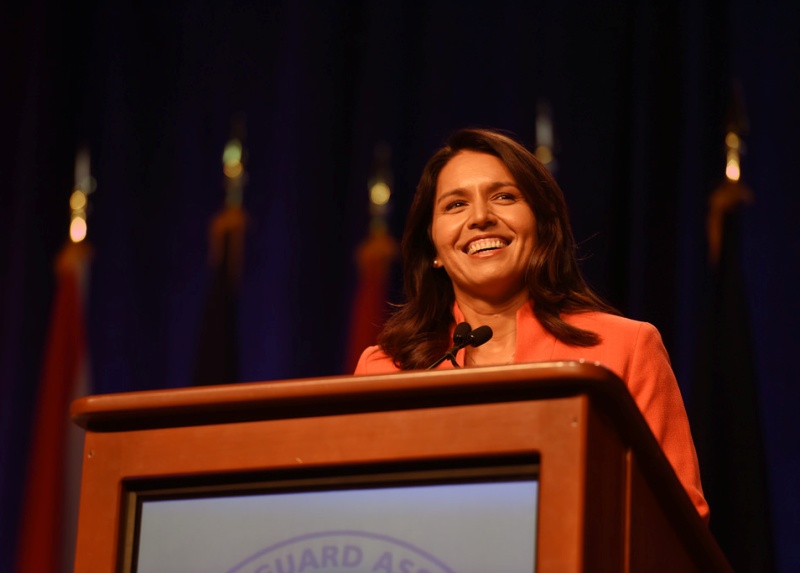 Overall, Gabbard has a value that could really enrich the American presidency.

However, within hours of announcing her candidacy, questions about Gabbard’s past came to light that she continues to address. Among these was her work and full-throated support for her conservative father’s political action committee. The Alliance for Traditional Marriage aimed to oppose pro-LGBTQ lawmakers and legislation, and in 1998, organized an amendment that gave Hawaii legislative power to reserve marriage for cisgender heterosexual couples.

The Alliance for Traditional Marriage called homosexuality “unhealthy, abnormal behavior that should not be promoted or accepted in society.”

When she entered politics, Gabbard was a socially conservative twenty-one year old. Now at thirty-seven, she's done a 180 and is on record as being pro-choice and pro-same-sex marriage (as of 2012, when she ran for Congress), as well as supporting Medicare for all.

Political evolutions are not uncommon. Back when she was a senator from New York, Hillary Clinton said, "I believe that marriage is not just a bond but a sacred bond between a man and a woman.” But by 2012 she'd become a strong supporter of marriage equality.

Gabbard’s previous views on LGBTQ rights and same-sex marriage may very well have changed completely from the past, but does this remarkable evolution reflect a bigger issue in her bid for the Democratic nomination?

Since being a Representative, Gabbard has supported efforts to promote queer and trans equality, including co-sponsoring pro-LGBTQ legislation like The Equality Act, a bill to amend the 1964 Civil Rights Act to protect LGBTQ individuals.

"I grew up in a very kind of conservative household. A multi-ethnic, multi-racial, multi-faith home," Gabbard said, speaking to her shift in positions. "Diverse in our makeup and diverse in our views. And I held views growing up that I no longer hold.”

More on Gabbard can be read here and here.