As seen on TBS, LOGO, and “Last Comic Standing," Goldberg has garnered national attention with her powerful comedic voice leading the resistance against the hateful and bigoted rhetoric coming from the Trump administration. 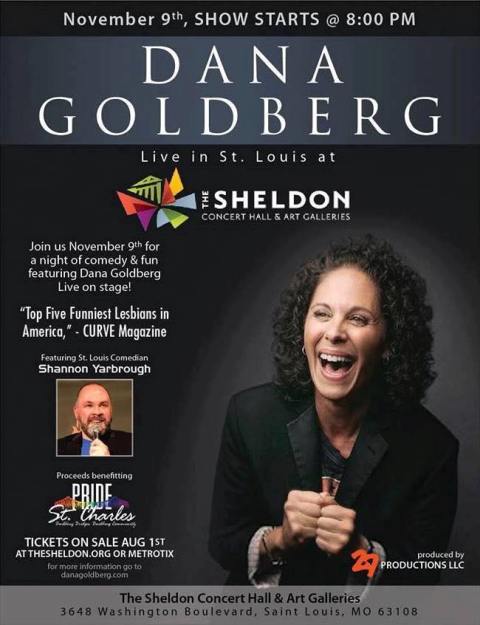 Combining her comedy with humanitarian efforts Goldberg has raised over $20 million for LGBTQ equality, women’s health, HIV/AIDS education and prevention, and numerous other organizations across the country. Blocked by the President Of The United States on Twitter, her outspoken and hilarious tweets have been featured by the Associated Press, Huff Post, Democrats.com and many other social media pages. Dana has been using her voice to empower and bridge communities through her sidesplitting humor and poignant, timely comedy.

Dana will be joined on stage by local comedian Shannon Yarbrough. Shannon is a published writer and respected comedian on the circuit.

Ticket prices are $25 - $60 and help benefit Pride St. Charles to continue to create an environment of equality and diversity for the LGBTQ community. The event is 16+ or accompanied by a parent or legal guardian. For ticket information check out https://www.thesheldon.org/concert-detail.php?id=694