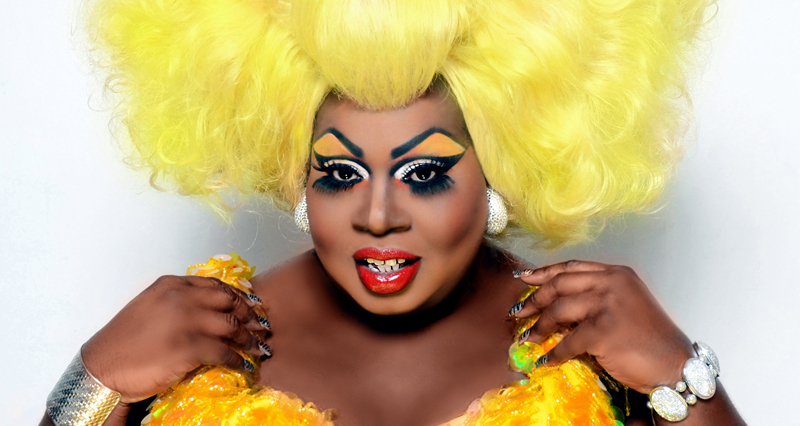 The large and in charge; the chunky, yet funky Latrice Royale takes over the PrideFest Bud Light Entertainment Stage to emcee and entertain on Sunday, June 28 from 2:15-4:15 p.m. and the RuPaul's Drag Race Season 4 finalist plans to turn the party!

We're excited to have you at St. Louis PrideFest. I know you were supposed to be here two years ago but had some travel issues.

What do you have in store for St. Louis audiences?

Oh, you know I'm gonna turn the party. I'm a high energy, feel-good diva; I'm an old school girl. I like to do old school house music that really gets the crowd going and I've gotta take 'em to church, honey. You've gotta get some hallelujah in your life. So it's going to be a fun show, it's going to be a lot of energy and a lot of fun. I'm looking forward to it.

Take me back to the first time you went to a LGBT pride event; what was that experience like?

The first pride event was a real eye opener for me because I got to see all of the different types of our community; all the different elements and lifestyles coming together and celebrating together which was absolutely amazing. To see everyone celebrating and of one accord and united for the first time is really wonderful - but at the same time this should be something that we should be doing every day, you know what I mean? We should be celebrating every day and bring our community together a little bit more. 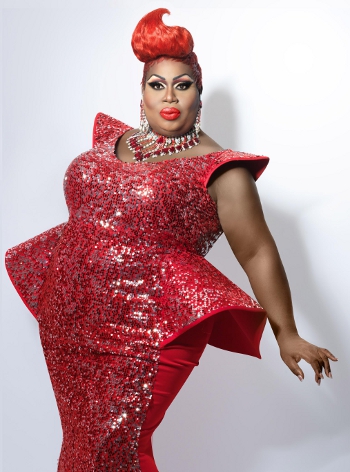 How many prides do you attend on the circuit? It must be a really fun gig to see how the various cities celebrate.

It's the busiest time of the year for us, and I say us as Drag Racer cast, pageant queens. It starts around February because of the different regions around the country where it gets warm - like in Florida, we do ours early in the spring time before it gets too hot. And some other places in the south go all the way into October. So it's a pretty long season and we're quite busy and we try to get to as many as we can, but it's a competitive market and I love it. [laughs].

Now that you're a few years out from Drag Race - how has your career, your brand evolved over time?

Well, in theory we want it to evolve, right? And that's on the plus side of things - I'm very blessed - we have evolved. But some people are not that fortunate. It definitely depends on the individual; how well liked you are, how you market yourself, how you put yourself out there. If you are a smart business person you get your ducks in a row and you plan for longevity, you don't plan for right now. Because that's the ultimate goal is to be working longer down the road and supersede your 15 minutes of fame. That's my goal and that's what I set out to do and here we are in my fourth year of being a corporation and a business and a brand and we're very successful. We have huge things coming up in the very near future and so I don't plan on stopping - I'm just gonna keep on trucking.

Any exciting news we can help you break?

I did complete my documentary this past year - Gays in Prison - and it is obviously a documentary based on our culture and being locked up and my experience with being locked up. You'll see a little behind the scenes of what I went through and my lifestyle now and before Drag Race and how it's been impacted as well as some of the stories of inmates who are currently in prison right now. It's gonna bee good viewing and learning and hopefully we can make some changes and differences.

Is there an advocacy piece to the documentary - changing things in the prison system for the LGBT community?

That's always a possibility but that's not what the focus is at this point in time. But you never know what might happen and where the universe might take me, so I'm open to that because I've been through it. I got the same false promises and false hope that they give all these inmates and it's just not true, it's not true. You have a scarlet letter on you forever and you can't get a job - you just can't - it's hard. And thank God, thank God that I'm not in the corporate world; I'm an entertainer, so I kind of work for myself anyway. Thank God I had that kind of thing going on for me. But not everybody has that - some people are just asked out, asked out, and it's unfortunate. So if I can help change something along down the way I would love to. I would love to be a part of that movement. I'm an ordained minister as well so I've been marrying the gay folk and fighting for marriage equality across the universe. So a lot of things are going on and I'm trying to be a part of the greater cause as well as take myself to the next level. But I still want to be involved in my community.

We should know the winner of Season 7 of RuPaul's Drag Race when this interview is published. Any predictions; what are your thoughts on this season?

No predictions. Nobody wants to hear what I've got to say right now because I'm just not, like - can you say overly impressed with this season, I'm just not overly impressed. It's no secret. I hear everything negative about it, I hear what people are talking about and it's general consensus. It's a little bit lackluster - I don't feel like I got to know anybody this season. I don't know anybody's story line, I don't know where they come from, really - anything about them that's significant that stands out to me. I can talk of Ginger who did the show for the old lady but that's just one incident and we're more than half way through the season. I just don't know anything about them other than the ones I know and manage. So to say the least, I'm not impressed [Laughs].

Early in the season Ginger made the claim that there's a bias against big girls on RPDR (although she's currently in top five right now). Did you ever feel that was the case?

What I always tried to do when I was on the show was I never wanted my size to be a factor in anything that I did. I don't want you to say: oh, she looked good (for a big girl); oh, she had a nice shape (for a big girl). I want you to forget about the fact that I'm a big girl and just embrace what you see. RuPaul's Drag Race and the fans (and I don't mind saying that) have a tendency to go with what's aesthetically pretty; pretty being thin and modelesque and that to me is not what all drag is. Especially this season we have a lot of models; you know, a lot of pretty boys and when you're pretty it makes you popular and that's just how it goes. It's a stigma and it's horrible and I hate it and I wish it would change but it won't so there's nothing you can do about it. Whatever. The thing of it is, big girls do have to work a little extra hard to prove themselves. When you have the stigma that we're all lazy and fat and stinky and smelly and all those things - all those things - but I'll be damned if you're going to come up to me and say that I stink or smell or that I'm lazy. You'll NEVER catch me like that (unless it's after the show, but I'm still not gonna stank, bitch). [Laughs].

You'll be performing at PrideFest - what does PRIDE mean to Latrice Royale?

First of all, what pride means to me most is hold yourself high from within; celebrate being who you are as a person and loving yourself as an individual. That's what pride means to me. PrideFest to me is a celebration of everyone celebrating who they are and loving who they are and coming together and that is just the ultimate celebration to me. I have a special and deep compassion for pride festivals and celebrating pride because I wouldn't be who I am if I didn't have my gay community behind me and they really came to me and supported me when I was down and out. No matter what, right or wrong, we all make mistakes and sometimes my pride community makes mistakes but I'm not going to stop celebrating and fighting for us.